Finished reading: Antinet Zettelkasten by Scott P. Scheper, 📚 a book about how to create an analog Zettelkasten (slip box) that acts as a “communication partner” for thinking and creating. 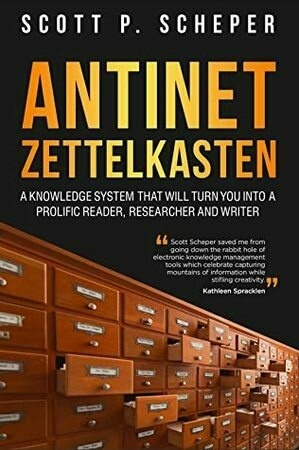 After seeing a couple of videos from Scott and keeping up with his website, I expected this book to be a deep and dull venture into the analog Zettelkasten, including tons of history and facts. Not that his other content is this way, but the build-up to the book made me think this. However, I thought it flowed nicely and was pretty easy to read. Perhaps this is because I’m already familiar with the material, so I didn’t get stuck at any point. Also, the book appears much longer than it is. Each chapter has several pages of footnotes, and I recommend exploring them, but they take up a lot of space. 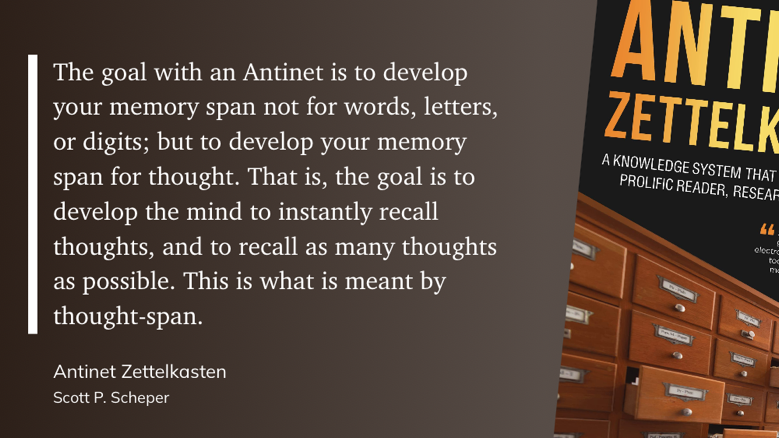 Scott explores the analog Zettelkasten, made famous by Niklas Luhmann, a German sociologist, philosopher of social scient, and a prominent thinker in systems theory. Luhmann used a note card system that enabled him to publish dozens of books and hundreds of scholarly articles over his lifetime. The Antinet is Scott’s version of this system, nearly identical to the original.

The four principles of the Antinet are Analog, Numeric-Alpha, Tree, and Index. The Net in Antinet stands for network. I won’t try to go into the details in this post; there are plenty of other articles that do this well (or get the book).

While Scott has an article on his website explaining how to get started with an Antinet, the book goes into much more detail. You’ll learn how to create the cards, bib notes, index, and other system components. It does take a while to get to the step-by-step instructions, but it’s probably important to understand the concepts first.

Scott spends a reasonable amount of time discussing how this analog system can become your “communication partner.” This idea is pulled from Luhmann’s essay “Communicating with Slip Boxes.” If you want to go deeper into Luhmann’s work, you can visit the Niklas Luhmann Archive.

Scott mentions (several times) How to Take Smart Notes by Sönke Ahrens and how, although Sönke introduced the Zettelkasten system to modern day, he also gets much of it wrong, especially by trying to make it work in digital tools. 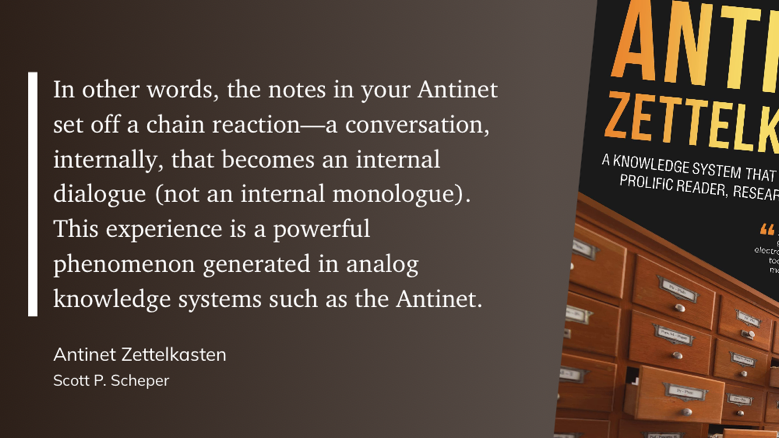 Who should create an Antinet? This system is not for those who need to capture technical notes, meeting notes, etc. This is a thinking tool, and you would use it to gather your thoughts during research. The system is best suited for specific projects where you need to do a lot of research, gather your thoughts, and then create an output (academic paper, article, book, etc.).

You want to use an analog Zettelkasten because it forces you to slow down and think. Not only do you have to take the time to write notes by hand on index cards, but you also have to think about where to put the card. This is intentional, forcing you to think and connect ideas by flipping through your cards. As you do this, you engrain these thoughts into memory.

Am I going to create my Antinet? Maybe someday, but I don’t need it now. As I mentioned earlier, it is best to have a big project or do a lot of research. I’ll be honest. When I first read How to Take Smart Notes by Sönke Ahrens, I tried to create a digital Zettelkasten. I spent about a year of my life trying different tools and approaches. I later realized I was pursuing the system for the wrong reasons. I was trying to force a square peg into a round hole. Not only that, I was trying to replicate it in Digital tools, which misses the point. 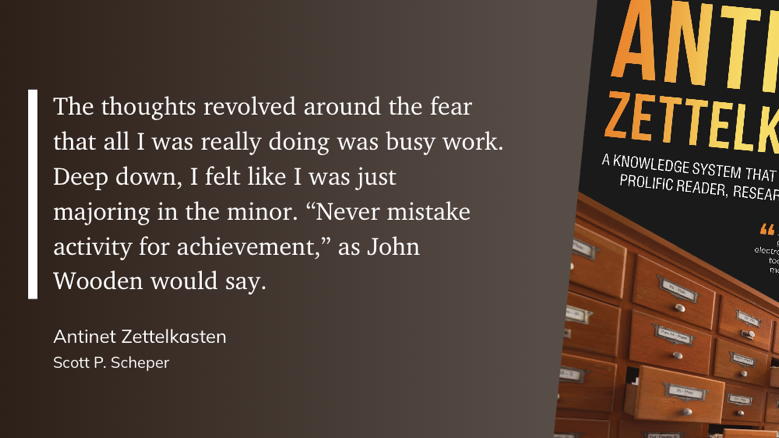 Overall, this was a good book. I would recommend you check out Scott’s website and videos first. If these are interesting, then the book is for you. I enjoyed it more than I expected, but I admit, I geek out on this stuff.